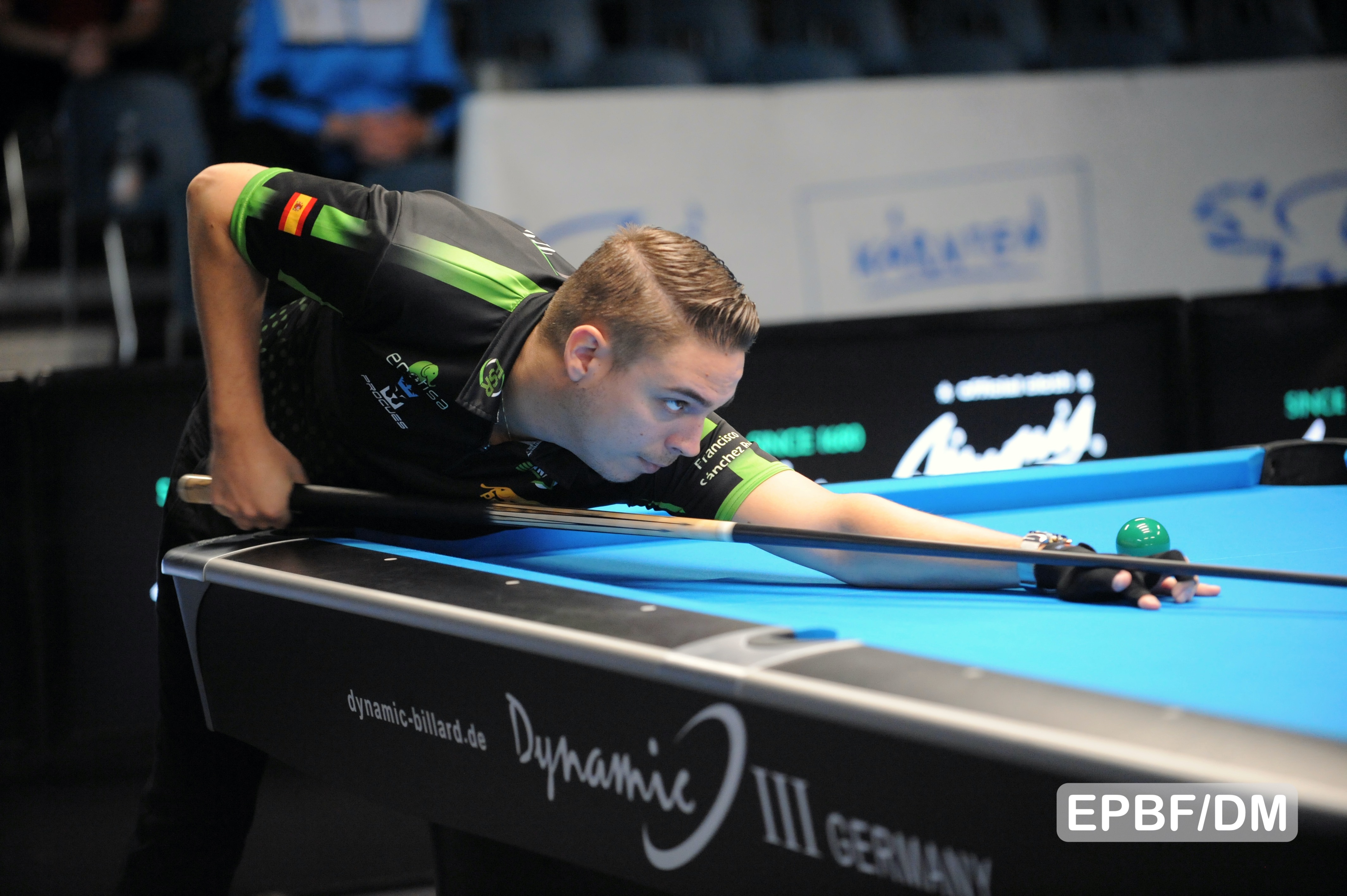 In winner’s round 2, #9 ranked player Francisco Sanchez-Ruiz encountered Ante Sola, an unheralded 20-year-old player from Croatia. Sanchez, having won the junior’s World 9-ball title in 2010, had a furious start and won the first 3 consecutive racks to get a head start with 3:0 over Sola. The young Croatian always tried to keep a foot in the door but Sanchez used his experience and managed to always stay ahead of Sola. In the end, Sanchez got to a well-deserved and clear 9:4 victory over Sola which was never endangered at any time during the match. Sanchez will now face Roman Hybler (CZE) in the next winner’s round while Sola waits for the winner of the match between Matthias Blim (AUT) and Jani Uski (FIN). Both matches are scheduled for tomorrow.

Other remarkable results include Mats Schjetne (NOR) winning 9:5 over Ralf Souquet (GER) in winner’s round one. In the same round, Roberto Bartol (CRO) pipped „Napoleon” Marcus Chamat (SWE) to the post with 9:8. Jani Siekkinen (FIN) overpowered „The Maharaja” Imran Majid (GBR) with 9:6. After a long time of being absent from the Euro-Tour, former World Games Champion Darren Appleton (GBR) attended the Klagenfurt Open. In his first-round match, he overcame Jan Kjetil Nordrum (NOR) with 9:4. Then he had to give in to Jakub Koniar (SVK) at 8:9. On the loser’s side, Appleton managed to stay alive in the event by winning 9:3 over Andrea Milioli (ITA).

Probably the biggest upset of the day happened in the match between Ruslan Chinakhov (RUS) and Michael Schneider (SUI). Chinakhov, currently ranked #17 on the Euro-Tour rankings was the favored player by miles. The Russian has already won a Euro-Tour event in Leende in 2017 and became second in Treviso in the same year and in Leende earlier this year. He is definitely one player to count in when guessing who is taking the victory in a Euro-Tour event. His opponent is not even listed in the current Euro-Tour rankings. But Schneider took down Corrieri in his first match with 9:7 which should have rung all alarm bells with Chinakhov. However, the course of the match between the two was very amazing. Chinakhov could not find any rhythm in his game and Schneider consequently used that to his benefit. Chinakhov underestimated his opponent obviously. It took nine racks for Ruslan Chinakhov to open his account against Schneider who was already on the hill with 8:0. After Chinakhov won rack #9, the Swiss player wasted no more time and won another rack to wipe the floor with Chinakhov, winning 9:1 over the disappointed Russian who now needs to come up with a good performance over the loser’s round in order to make it to the Mosconi Cup team this year.

Tomorrow, the Dynamic Billard Klagenfurt Open 2019 will continue at 09:00 CET with matches from loser’s round 2. Also, tomorrow at 09.00 Sjef from Sonny´s Billiard Supplies will be present the news in the Billiard industry or take a look onlu°ine on his shop. http://www.sonnys.be

Every day, up to two matches will be streamed LIVE over the EPBF Facebook page and on the EPBF YouTube channel. Check for updates and announcements.

The Dynamic Billard Klagenfurt Open is played in the Sportpark Klagenfurt Arena in Klagenfurt, Austria, on up to 24 tables which are all streamed LIVE throughout the whole event. In order to be able to follow all the action LIVE, premium membership can be obtained at www.kozoom.com. Once a premium membership is held, all events for the respective period of time can be viewed LIVE. Additionally, a huge video gallery is contained on the website.

The event is hosted by the European Governing Body for Pool, the European Pocket Billiard Federation (EPBF) and organized by International Billiard Promotion (IBP). For further information and reference please go to the federation website www.eurotouronline.com or visit us on Facebook for regular news clips or contact our press office press@epbf.com.