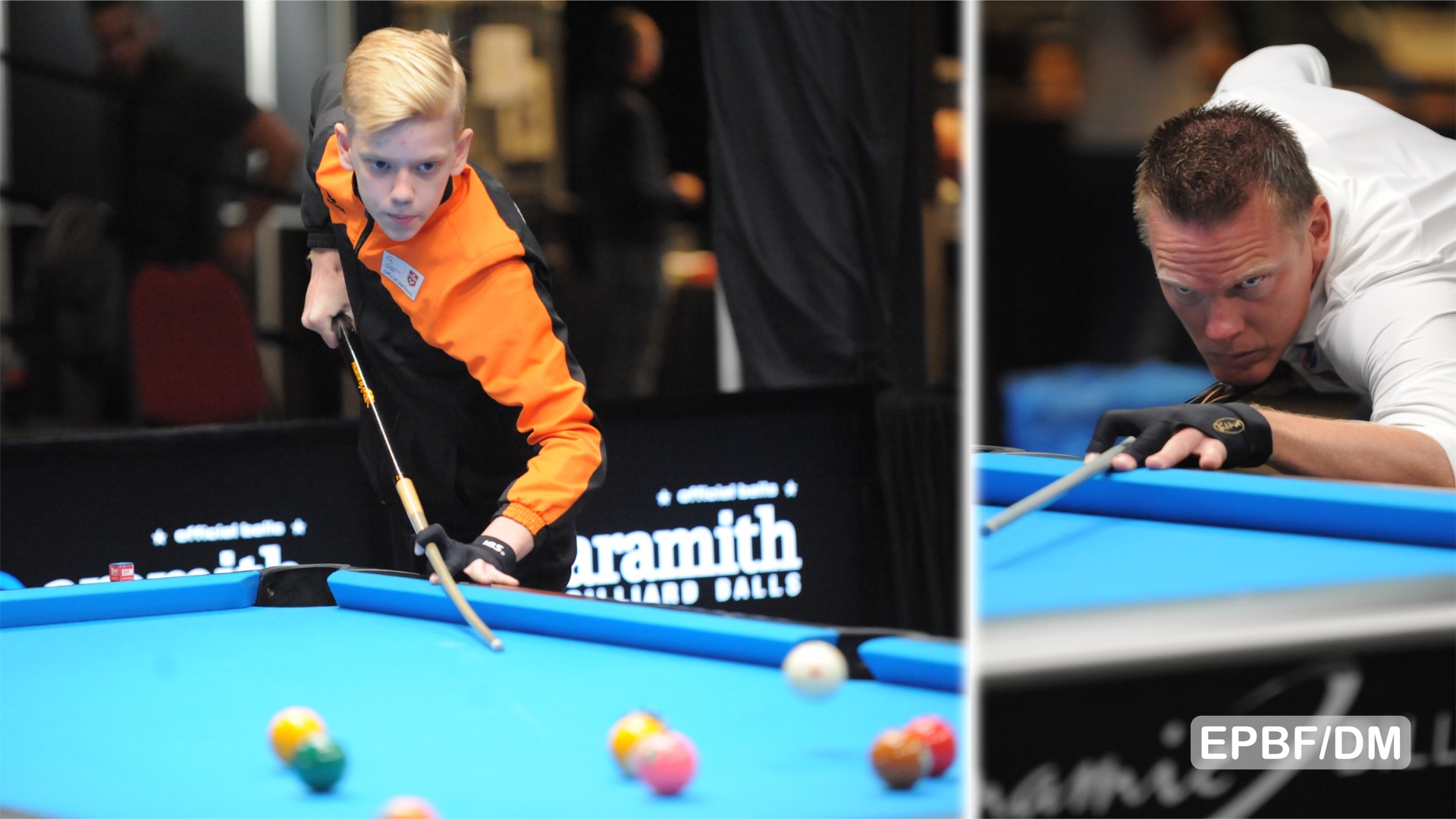 Probably the biggest news of today is that 14-year-old Yannick Pongers (NED) ousted „The Terminator” Niels Feijen (NED) from the Dynamic Billard Veldhoven Open 2019 with 9:8.

Earlier today, Feijen had to take a defeat against Marco Dorenburg (GER) with 6:9 already. He then went on to the loser’s side where the Dutch junior player. Pongers was already on the loser’s side and just barely made his way through to the match against Feijen with a 9:8 victory over Jonas Souto (ESP). Before the match, probably everybody including Pongers thought that Feijen would definitely be the player to make it through. He has all these prestigious titles and wins under his belt. But the way the match went proves everybody’s expectations wrong. Young Pongers hung in there and lever allowed Feijen to get a big advantage over him. To the contrary, he used his chances and took the points whenever possible. After 14 racks, the score was 7:7. Feijen executed the break shot and he had a ball down but no shot on the lowest numbered ball. A safety battle evolved where Pongers prove to be the smarter player. He forced Feijen to make a mistake and consequently ran the rack to get on the fill first, taking an 8:7 lead over Feijen. Then in rack 16, Pongers had the break shot. He broke dry with no ball down and even had an illegal break. Since the lowest numbered ball was not available, Feijen handed the table back to Pongers. This time, Feijen had the better end in his favor and was able to win the rack, making the match a hill-hill affair at 8:8 with his own break shot coming up. This time, Feijen broke dry with all balls spread nicely on the table. Pongers decided to go for a safety and this time he lost the safety exchange to Feijen. „The Terminator” had an open table in front of him without any real problem visible. To his horror, he missed an easy 2-ball and left the layout for Pongers. The youngster cleared the table and won the rack and the match with 9:8 over Feijen. In his next match, Yannick Pongers met Damianos Giallourakis (GRE). In that match, the young Dutch was not able to keep up his brilliant performance and lost 6:9 tot he Greek. However, this 49th rank finish can be regarded as a really high achievement of the 14-year-old Pongers.

Other remarkable results include Tim de Ruyter (NED) ousting David Alcaide (ESP) with 9:7. On the winner’s side, Oliver Ortmann (GER) was able to defeat his fellow countryman Ralf Souquet (GER) with 9:6. Then, Ortmann lost a nail biter to Chinakhov with 8:9 and had to go up against German youngster Jacques Wollschlaeger. Here, the youngster was dominant and ended Ortmann’s run in the Dynamic Billard Veldhoven Open 2019, handing him a clear 9:4 defeat. Former World 9-Ball Champion Thorsten „The Hitman” Hohmann (GER) lost his loser’s qualifying round match against Oliver Szolnoki (HUN) with 3:9.

Like every day at the Eurotour, you can visit the shop from Sonny´s Billiard Supplies. Or watch online the most completed webshop for Billiards http://www.sonnys.be

Every day, up to two matches will be streamed LIVE over the EPBF Facebook page. Check for updates and announcements.

The Dynamic Billard Veldhoven Open 2019 will continue tomorrow morning at 10:00 CET with matches from the round of the last 16 players. The final match is scheduled for 18:00 CET.

The Dynamic Billard Veldhoven Open is played in the NH Conference Centre Koningshof in Veldhoven, The Netherlands, on up to 24 tables which are all streamed LIVE throughout the whole event. In order to be able to follow all the action LIVE, premium membership can be obtained at www.kozoom.com. Once a premium membership is held, all events for the respective period of time can be viewed LIVE. Additionally, a huge video gallery is contained on the website.

The event is hosted by the European Governing Body for Pool, the European Pocket Billiard Federation (EPBF) and organized by International Billiard Promotion (IBP). For further information and reference please go to the federation website www.eurotouronline.com or visit us on Facebook for regular news clips or contact our press office press@epbf.com.